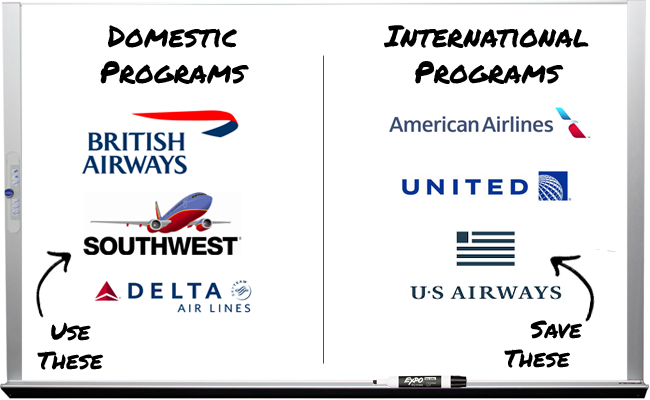 Additional benefits of the Domestic/International Split of Milenomics.

Milenomics has a clear differentiation between international mileage programs such as UA, AA, and US, and those used for domestic travel, such as BA, WN, and DL. I’ve mentioned that you should look into your own travel patterns, and your demand schedule and see if these three can work for you.  If they do, this post will show you how to wring out even more value from these miles, and how these specific programs have been picked to save you money in the process.

We’ve covered this in two different posts, First the discussion of the “Principle of Mileage Conservation.” Secondly we talked about using these miles for our domestic travels in the post entitled “The Low Level Hedge.”

Milenomics has picked these programs for very specific reasons.  The first reason, and the one we’ve already covered, is that they aren’t very good programs for international travel.  Delta Miles are actually not too bad for international trips, but most people would prefer something a little easier to search for award flights with.  Their website is absolutely awful.  In fact as I’ve mentioned numerous times, the best site to search for Delta awards at low level is actually the www.alaskaair.com site. Soutwest is domestic only (if  you exclude AirTran flights), and Avios start to fall apart with longer flights, especially those with lots of stops.

These three programs each have key ways they save you money as well as miles, and I’ll outline those today. In addition they complement each other very well, creating what I like to call the “Hybrid System” for award booking.

Money Saving Benefits of Each Program

Lets assume that you’ve got the following flights on your domestic demand schedule.  You need to be in seattle (from LAX) this weekend, and then In February of next year you need to be in Orlando. Because the Seattle flight is so close, prices have spiked, and you’d rather book with miles than cash.

You’d also book LAX-MCO for 25,000 per person.  Fortunately it is far enough ahead of time that you would only pay the $10 per person for the flight.

The Hybrid System takes advantage of Delta offering one stopover and an open jaw on some domestic award tickets.  This means you would be able to fly this Friday from LAX-SEA with Avios, 7,500 per person, plus $5 per person.

You would then book the return as part of a Delta  ticket, SEA-LAX this Sunday  the 22nd and use your stopover in LAX.

Stop in LAX for months, days, weeks, and then continue LAX-MCO as your destination, and a week or two later fly back MCO-LAX all for the price of one ticket, with no close in fees either.

You’ve just saved yourself $75 and 17,500 miles using these programs instead of AA, UA, or anyone else. Even using Avios alone for this trip would cost you more (40,000) than the Hybrid System.

The same is possible with Southwest RR points.  If the destination is close and the flight cheap enough you could book the first 1 way with RR Points, and then the return with DL.  If you have a Companion pass this will make things even cheaper.

These flights work in reverse as well, so you could fly LAX-BOS-LAX =STOP= and then continue on to SEA, and book a return flight with Avios.  The beauty of using these three programs is that whichever way you start the trip you pay no close in booking fee. This also works for First class bookings, and you could do LAX-JFK instead and fly Delta’s flat bed as part of this.

The system works on the east coast as well, but the options get tougher.  In the below example we’re buying ATL-BOS with WN RR miles, and then the return with Delta Skymiles.

Can You Take Advantage of the Hybrid System?

Now would be a good time to take a look at your domestic demand schedule, and see what trips you can consolidate in this manner.  Using Avios + DL or WN + DL you can go farther for less.  Look for areas where your trips overlap–and consolidate those overlaps into 1-one way, and a Round trip with a stopover whenever possible.  As I mentioned the route must be legal in Delta’s eyes, and this post is getting a bit long, so I’ll have to cover that more in another post.  Basics for now, try the Hybrid System out, and if it works, and prices as one flight, great, if it prices as 2 flights on delta.com you’ll not be able to use it.

Having these three programs for domestic travel allows you to decide on taking a trip a year, 6 months, or 6 days before you leave for it, all for no additional out of pocket expense. Often times we forget that the fees in a program can take away the savings we get from using Miles.

Milenomics Hates fees.  You’ve heard me say that before, but I want to stress it again.  Fees eat up money you can be using for your travel. Instead it just gets sucked into a black hole.  Follow @Milenomics on twitter, or subscribe via email to fly farther for less money (and less miles). 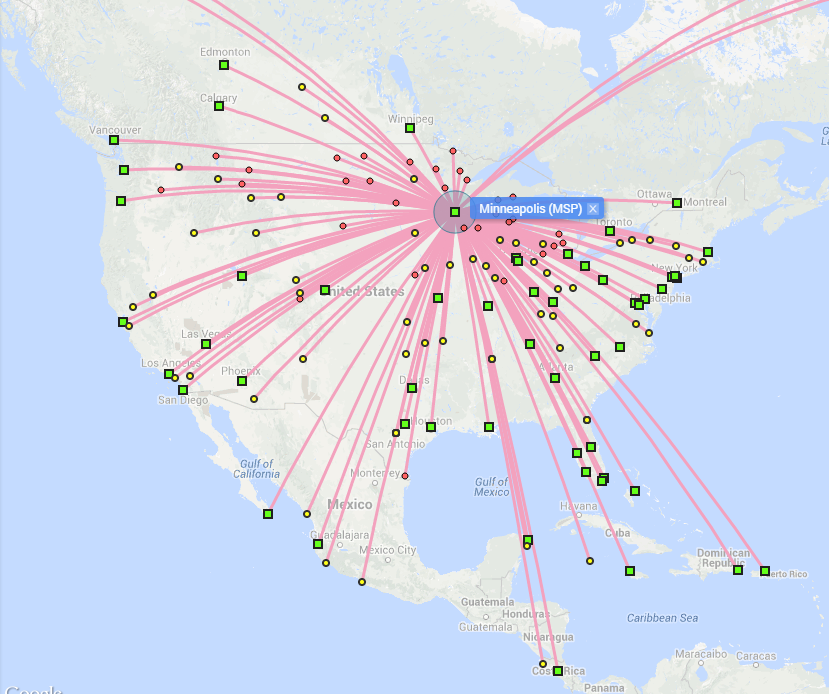 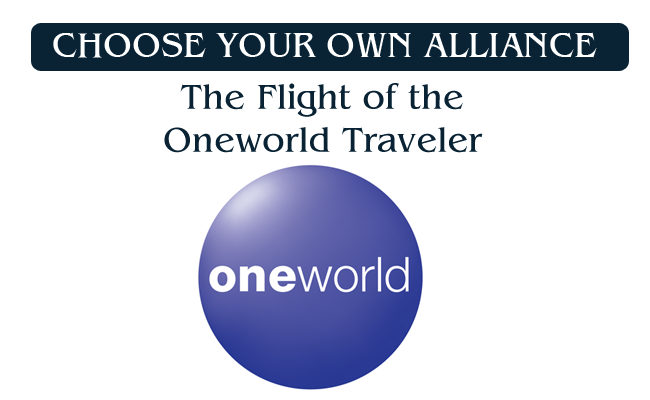